April 23, 2013
Yesterday, I started my first Whole30 program.  And it felt as restrictive as I thought it might, but it also opened my eyes to a few things about my food choices.  To put it frankly, I may have been a little more loosey and goosey than I thought when I started this thing. 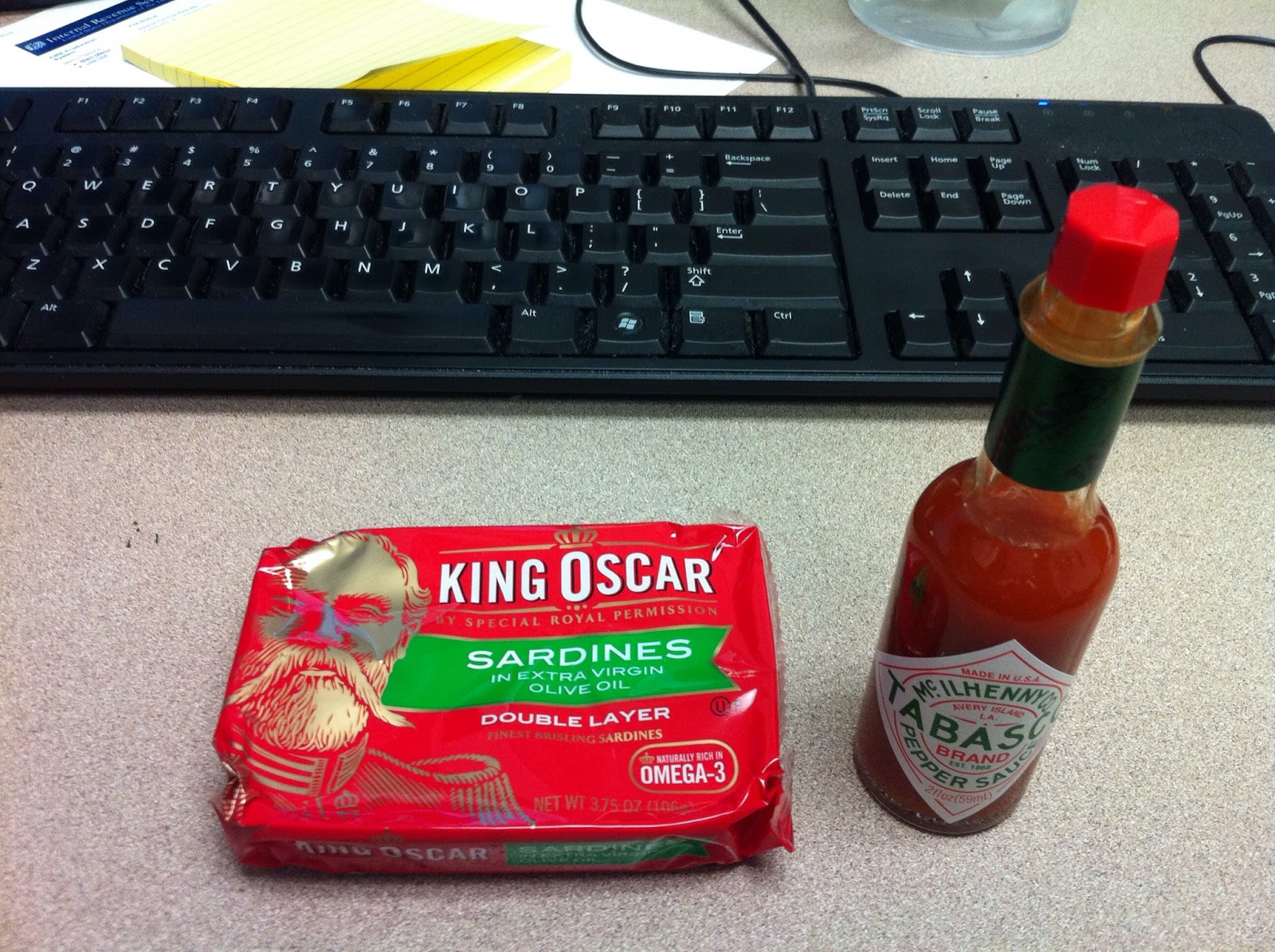 First, the food:  I'm not a big breakfast person during the week most of the time, but today I was a bit peckish.  So I put away a tin of King Oscar Sardines in olive oil - my favorite brand.  And there was a splash of Tabasco on them for a bit more flavor.

And yes, I ate them at my desk.  I keep a 4-pack of these treats in my desk at work.  You can get them cheap at Costco - one of my favorite finds there (along with a multi-pack of Kerrygold Butter, which is not applicable for the next four weeks or so unless I decide to try to make ghee).  I find that eating sardines at my desk keeps other people away from it and I end up having fewer people bother me. 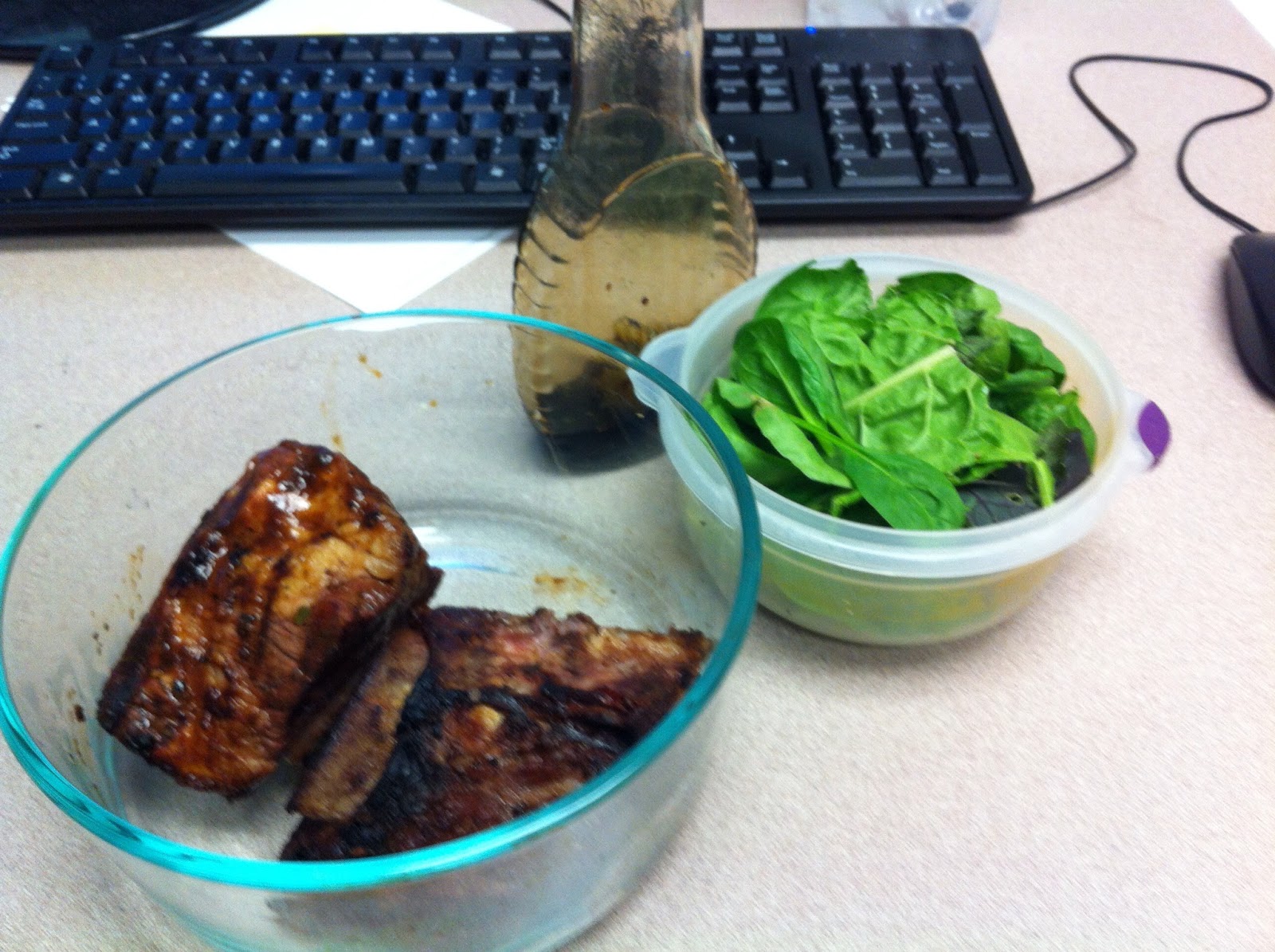 Lunch was also at my desk.  Sunday night, my wonderful wife had just returned from the Columbus North Market with a whole mess of grass-fed beef short-ribs, which we grilled and had plenty leftover for yesterday.  A green salad with olive oil and balsamic vinegar on the side went with it - also delicious.  I have more of those ribs today.

I keep a glass bowl in my office as well.  We have a kitchen with sink so I can clean it, never fear.  But I am trying to avoid phthalates and BPA and the whole nine yards (Whole 9, get it?) when I heat up lunch, plus it's easier to cut meat against glass than against plastic.  Fewer plastic shavings, too.  I'd like to get one of those Lunchbots or Planet Box deals but I work with what I have.  And lunch was delicious.

Dinner was a little catch-as-catch can, but I managed to cook up some Brussels sprouts in our cast-iron pan with bacon grease, some garlic, a bit of rosemary, and a splash of beef stock that I threw in to help cook them a bit faster as well as give them a bit of a different flavor.  I made enough to have leftovers today as well.  That was it at that point, as I had to get my son to his swim lessons.

But when we got home from swim lessons, I had some eggs (over easy) that we get from the Clintonville Community Market, an organic market that is literally two doors down from where we live.  They're pasture-raised and have really nice dark yolks.  They're delicious and have totally spoiled me for regular store-bought eggs.  Actually, I got the Brussels sprouts there, too.

So that was the menu for the day.

Now, on to the effects.  Last night, after I got home from the pool with my son, I started to get a headache.  I've gotten migraines before, and though they've lessened with my Primal Blueprint days, I still get them on occasion.  But this wasn't the same sort of headache - as opposed to the very localized pain I get with my migraines, this was more of a fuzzy ache over the whole head.

My thought is that I have been overdoing it on the carbs more than I thought - as yesterday's meal was very low-carb.  I put my food choices into PaleoTrack.com and the result was 27g of carbs.  That's REALLY low.  I usually don't worry about things like a bit of rice or potato, so I'm wondering if I'd been overdoing it (or, if not overdoing it given my activity level, just having much less than I'm accustomed to).

I woke up with a worse headache at around 2:30 AM, and I took some aspirin to relieve the headache.  Obviously I'd prefer not to do that, but I needed the sleep.

The other thing that the aspirin did (which is why I tried to go to bed without it to see if I could sleep the headache off) is mask the arthritic feeling in my hands.  I want to know when that goes away naturally.

I think we'll stay on this path today - keep the carbs down at the same level, etc.  I want to see if I have become less a fat-burning beast than I want to be and try to push my body back into that mode.  A little carb withdrawal is something I can deal with, but if the headaches continue or get worse after a week I'll try introducing some sweet potato into the mix.  I feel fine right now (the next morning) but I'm probably still under the influence of the aspirin.