September 02, 2011
Always pay attention to what's going on around you, because you don't know where it's going to take you.

A couple weeks ago, my sister and her little boy were in town, so they, my brother and his son, and my wife and two kids and I went to our local award-winning science museum, COSI.  Obviously, the goal was just to go and enjoy each other's company and let the kids all have some fun together.

Well, mission accomplished.  COSI was its usual fun, interesting place.  The kids all had a ball.

But that's not what this story is about.  Here's what it is about:  Steampunk.

That's right, if you're a sci-fi fan you may have heard about this genre/subculture.  Steampunk is all about "history as it never was," and revolves around the sort of science fiction that Jules Verne and the like wrote about - sort of an industrial-revolution-timeframe look at what might have been had we developed steam-powered technology more than gas, diesel, electricity, etc.  That's a vast oversimplification and I apologize to anyone who thinks I'm slighting it in the least, because I'm not.  I think steampunk is super-cool. 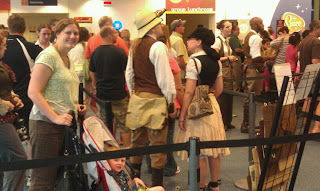 But like any genre, there is a subset of folks who REALLY get into it and go as far as to dress up differently to reflect their love of the genre and the like.  And that's who we ran into at COSI that day, a group of Steampunks who were there to see the museum, particularly the Adventure exhibit that COSI is currently hosting (which is also really cool, check it out if you can!).

I chatted with a couple of them briefly, because they looked good (I've always liked the Victorian adventurer genre as well as the science fiction of the era) and they seemed like interesting folks.  And that was probably going to be that.

Except that the last time I had an inkling for some Steampunk and was reading a couple of books within the genre, I also downloaded some music to my iPod from a Steampunk band called Abney Park.  And those of you who follow me on Twitter know that I've been re-listening to that stuff a lot for the past few days, they're a really good, musically interesting band.

At that time, as I'm known to do, I wasn't really listening to the lyrics of the music.  For whatever reason, I personally have a hard time understanding what vocalists are singing unless the lyrics are sitting open right in front of me so I can read along.

But for whatever reason, I'd taken the time back when I first bought Abney Park's existing albums at the time to find the lyrics to the songs and copy them into the songs' info on iTunes (yeah, you can do that.  Feel free to ask me how if you don't know already.).

And so, sitting on the bus the other day, I was listening to their song "Letters Between a Little Boy and Himself as an Adult," and I happened to catch the lyrics as I was going to fiddle with something on my iPod. Here's the song:


And here are the lyrics:


Robert as boy:
Dear Mr. Brown,
One day I’ll be you and
Although I’m only eight now,
You need to hear my rules
Never stop playing
Never stop dreaming and
And be careful not to
Turn into what I’d hate

Robert as adult:
Dear little boy,
I’m doing my best up here but
It’s a thankless job and
Nobody feels the same
You work long hours
Watch your credit rating
Pay your taxes and
Prepare to die

Jody Ellen:
I have tried to keep my soul
I lost the fight to keep a hold
Now I am not awake
Now I’m not awake

Robert as boy:
Hey Mr. Brown,
That can't be what life is like!
I’ve watched some movies,
And I've, I’ve read some books
Life should be exciting
And sometimes scary but
What you’re describing doesn't
Seem worth the time

Robert as adult:
Hey little boy,
I think you were always right
I’ve dropped that worthless life and
I’m moving on
Life should be adventure
I’m stealing back my soul
I’ve lost too many years now
I’m awake

Robert and Jody Ellen:
You were right
I nearly lost my soul
I will fight to steal back my soul
Now I am awake
Now I’m awake

So that's the mindset I'm in today, all because of seeing some folks wearing brass goggles and pith helmets at COSI.  A simple glimpsing of some interesting people at a museum has influenced my mindset and got me looking at my goals and projects in a very different way.  But think of all the ripples that it took to get me to that point.

I could go on for a while with this.  But the ripple effect like that sort of works in two ways.  The actions we take have influence on other people...and the actions other people take have influence on us.  A few years ago, I might have just chosen to look at those kids in the goofy outfits at COSI and dismissed them.  Instead, I see them as leading me to a clearer understanding of myself and what I want to do with life, and most importantly why I want to do it.

Never, ever, ignore anything.