June 10, 2013
The world of barefoot running/minimalist footwear absolutely fascinates me.  A big part of that comes from my high school years, I think.
I used to be more of a runner when I was younger - running in 5 and 10K races with my parents a lot - until I hit high school.  Then, I ran one season with the cross country team and got runner's knee right at the beginning of the actual season.  Though I struggled through it I never really enjoyed it.  And that injury interfered with my competitive swimming (I was a breaststroke specialist, a stroke with a powerful whipping kick and lots of knee action) and gave me a lot of pain for the next couple years even though I stopped running.  Seriously - I had trouble walking down stairs without pain through my first three years of high school.  Pretty bad.
I think a lot about how things might have been different for me had I worn minimalist shoes growing up and especially in high school cross-country.  Sure, we were kids in the 70s and there was plenty of barefoot play.  And when we did wear shoes, our play shoes were primarily stuff like Converse All-Stars and the like, until high school came along and running shoes and the like got popular - and threw off my gait.  I was a heel-striker, big time.
So I've spent a lot of time trying out different minimalist shoes - starting with Vibram FiveFingers (KSOs) as most people do - and working my way into some of the VivoBarefoot shoes as well as a little successful experiment with Japanese tabi shoes.  But I'd missed having a pair of sandals to kick on and enjoy the weather during the summer, as most barefoot shoes fit pretty tight. 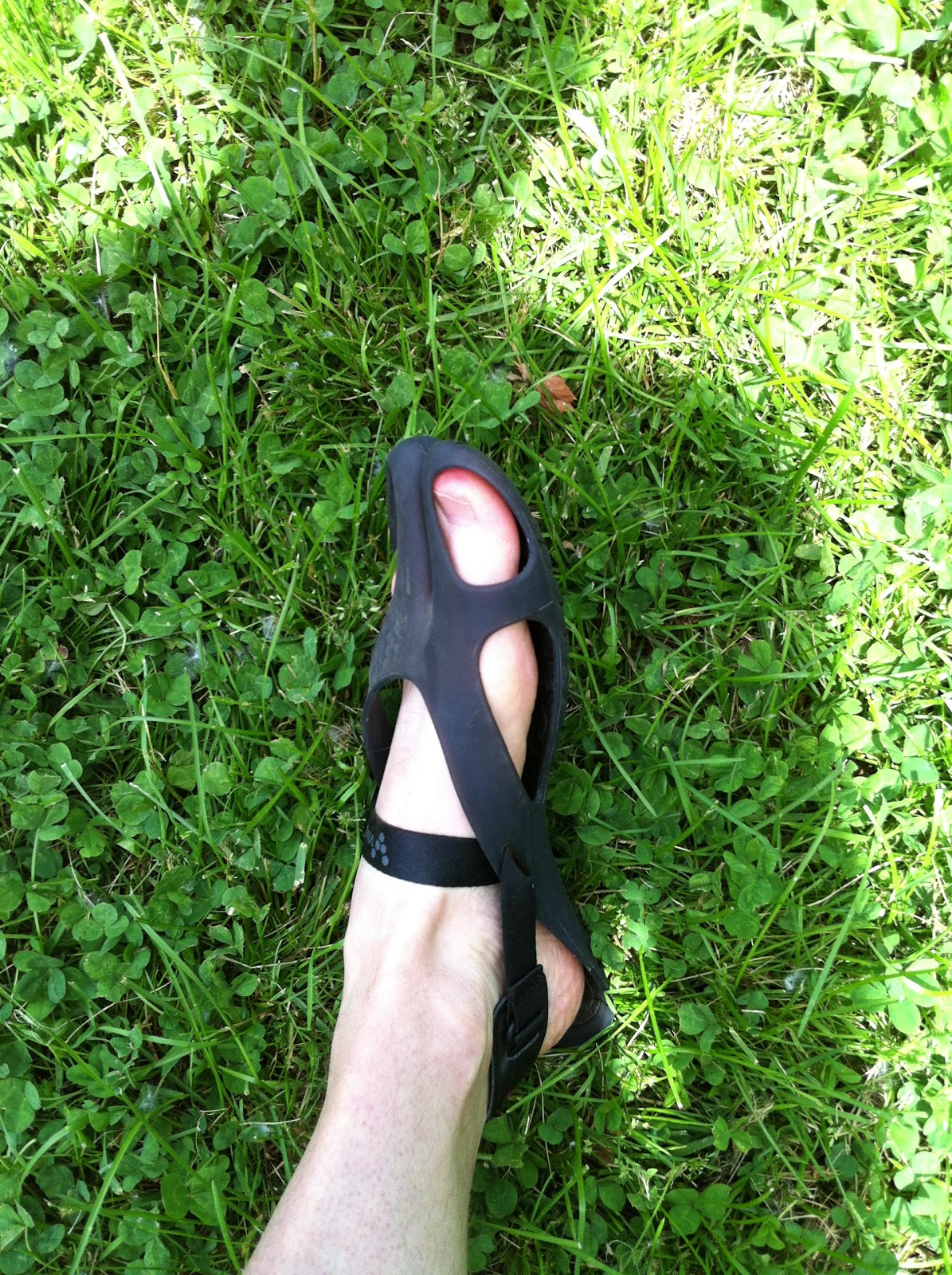 Enter: VivoBarefoot's Achilles sandal.
For those of you who've read Christopher McDougall's Born To Run, you know what I'm talking about when I mention huaraches - the sandals that the Tarahumara Indians of Copper Canyon made out of old car tires and string.  They were as minimalist as you can get, with no real padding and simply a layer of rubber between your foot and the ground to protect it from debris and heat.
Now, I've not worn a pair of actual huaraches at all, nor have I worn the Xero Shoes that are huaraches made with modern materials (like Vibram soles and straps/strings made of nylon cord).
But the Achilles is a nice solid sandal, for sure, and it is easily the most minimal footwear I've ever put on.  Basically, the sandal is one solid piece of strong rubber, with a nylon strap to hold your foot in place.  If you look at the picture, you'll see what I mean.  The strap goes over the top of the instep and back around the Achilles heel.  It's padded back there and very comfortable, with a velcro strap for adjustment.  The toes fit into a tabi-like pair of pockets (big toe in one pocket, other four toes in the other) at the front of the sandal for stability and a bit more safety than huaraches would give, forcing some separation between the big toe and second toe.  Because the rubber is thicker than fabric, the separation between the big and second toes is SLIGHTLY more pronounced than it is in Vibram FiveFingers.  I'd guess that this is done to mimic the cord that passes between the toes in actual huaraches.
The sole is slightly textured on the bottom for some traction.  I've done some light hiking with them in both wet and dry terrain, and have had no issues with traction whatsoever.  I have NOT hit any hard-core mud in them yet.
I like the toe pockets at the front, with one issue that I'll cover in a moment.  They cover enough of the front of the toe that debris stays out for the most part - and if it does get in there, it falls out pretty easily since there's nothing to hold it in.  And stubbed toes, which I think could be an issue with the huaraches, are not an issue at all here.  Even where the pockets open up to expose the top of the foot (on the outside part of the big toe and starting with the middle toe on the other side), there's a slight lip up in front of all the toes to aid with this.  The issue I had with the toe pockets is that they will take some adjustment for your toes - having a piece of rubber between the toes like that rubbed a blister when I tried to run in them the first time.  I should note that blistering was NOT an issue till I did try to run.
The back is flat - no lip as in the front, and that allows debris to fall out the back as you're running.  They do not "flap" like flip-flops at all, as the strap attaches to the sole right at the front of the heel.
So yes, I have run in them - about a mile before the blister started up.  It'll just take some work to get the feet used to the contact points.  The other smaller contact point where a bit of irritation occurred was at the top of the instep where the strap goes across.  But other than that, the running in them was excellent - there's no room for error in your avoiding heel-strikes so you really have to have good barefoot form.  If you've run in minimalist shoes that have even the least amount of padding, you know that they allow you to "cheat" even slightly on your form a bit.  You can't do that in the Achilles because it's going to feel really bad. I consider that a plus.
I'll be interested to see how they wear.  The VivoBarefoot shoes I've tried in the past, which are the Gobi (their "chukka boot" clone) and the now-discontinued Hind (a boat-shoe clone) have had varied results regarding wear.  The Gobis are excellent... I've been wearing them pretty much daily for work and as casual shoes since October and the soles are showing no signs of wearing out.  The Hinds, an older model, wore out pretty quickly.  But the rubber on these soles is much stronger than either the Gobi or the Hind, so I'll update you more later on this.  The other thing I want to watch is where the strap meets the sole to see how that holds up.  Other than that, I can't think of any stress points that might be a point of wear.
All in all, and for the price, I think this sandal is an excellent value for the money - they're strong, comfortable, durable, and exactly what minimalist shoe fans are looking for, I think.  Plus, they're named Achilles, which gives you wonderful delusions of battling Hector on the fields of Troy.  All in all, I recommend them for summer/warm weather wear.

UPDATE: Just got an email from VivoBarefoot with a Father's Day special on their Gobi, Ra, and Saddle shoes.  Check it out!