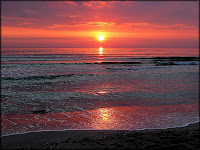 Last night, I didn't get a lot of sleep.  My nearly three-year-old daughter seems to have an inability to go to sleep by herself if she wakes up in the middle of the night, and she comes in to our room to either hop in bed with us or have one of us come back to her room to lay down with her.  So last night it was my turn, and I didn't have a very good night's sleep because of it.

As a result, I was slow waking up this morning, and with it not being a workout morning I slept in about an extra half hour instead of getting up and getting my day underway properly.  Bad news.  And the practical upshot of this is that I'm feeling more cranky than normal (I'm usually not that cranky, period).

During my bike ride, then, which was going along very pleasantly with some beautiful cool weather and not too much of a negative breeze slowing me down, I came across two ladies riding ahead of me.  As I caught up to them and was getting ready to pass them, we hit a stop light.  I pulled back into the right lane behind them and stopped.  They, on the other hand, ran the red light.  And then, while I sat fuming at that and waiting for the red light to change to green again, another cyclist (this one a hard-core roadie) flew past me through the intersection and ALSO ran the red light.

If you've ever read my blog Bike Commuting in Columbus, you know about my disdain for cyclists who don't follow the rules of the road. I'm a League of American Bicyclists cycling instructor and it galls me greatly to see people make cyclists look bad.  We have a hard enough time with traffic as it is, without antagonizing drivers and making them remember all those "scofflaw cyclists" and think we all act like that - especially when it comes time for pro-bicycle changes at the ballot box.

So I yelled at them. It was my typical "red lights apply to cyclists too, you're making us all look bad!" rant at them.  I was able to keep from adding a "jackass" onto the end of it.

But what did I really accomplish there? Sure, it allowed me to vent some frustrations via yelling. But that's it. It didn't make things any better for cyclists, and it didn't make those folks listen any more.  In fact, it's probably quite the contrary: my yelling probably made them think I'm some old fuddy-duddy who's trying to keep them from having their fun.

That's why it's so important to stay positive about things and concentrate on adding value to the world, especially in the morning as the day is starting.  Every night we sleep, even when we sleep poorly, is a reboot.  We get to start our lives all over again with a clean slate and begin to achieve our goals anew.  We get to reset our minds to focus on productivity, good habits and positive actions, and the steps we must take to achieve what we want.

And to color your morning with screaming at someone? That's hardly the most productive or positive way to go about anything.